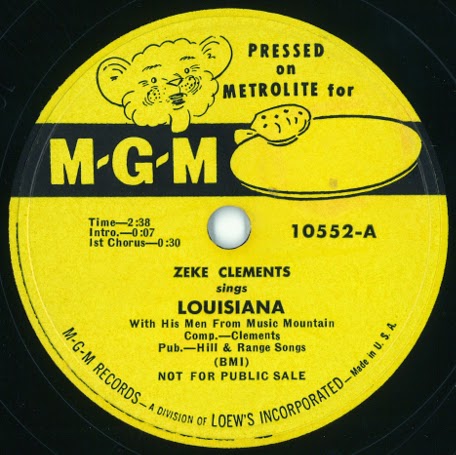 
From the fall of 1948 until the fall of 1950, Zeke Clements called Shreveport home. During this time, he hosted radio shows (music as well as news programs), performed on the Louisiana Hayride, and  recorded this song about his “home sweet home” Louisiana.

The song “Louisiana” begins by mentioning the Red River, the river that runs through Shreveport. Then, the lyrics list things more closely associated with places about 200 miles south of Clements’s North Louisiana home. Granted, Shreveport does have gumbo, bayous, Cajuns, and Mardi Gras...just in limited quantities.

Clements arrived in Shreveport an established musician. He performed on the Grand Ole Opry during the 1930s and 1940s. He had already appeared on over twenty records.  His songwriting yielded considerable successes, most notably “Smoke on the Water” in 1944.  Perhaps his most unique job, though, involved yodeling as Bashful in “Snow White and the Seven Dwarfs” in 1937.

Here are a few of our favorite Zeke Clements items from his Shreveport days.