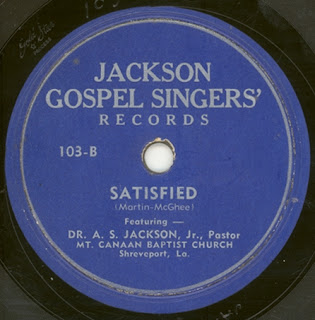 
From 1945 to 1957, Rev. Anderson Samuel Jackson, Jr. pastored Mount Canaan Baptist Church in Shreveport, Louisiana. Around the same time, he hosted a “radio ministry to the sick and shut-ins” on KENT. He also appeared on a few gospel music records.

The label on this record presents a curious mix of credits. So…is this the Jackson Gospel Singers featuring Dr. A. S. Jackson, Jr. performing on Jackson Gospel Singers’ Records? In any event, the group offers a rendition of “Satisfied” by the Roberta Martin Singers. Eagle-eyed matrix inspectors will note Gold Star Records in Houston, Texas, pressed this disc.

It’s also worth pointing out that while Shreveport boasted numerous black gospel singers, quartets, and choirs during the 20th century, few found their way onto records prior to the 1960s. As such, Jackson could be considered one of Shreveport’s gospel recording pioneers alongside the Ever Ready Gospel Singers, Utah Smith, and the Sybil Johnson Singers. However, I’m not sure anyone’s taking score.

For readers interested in biographical details about Rev. Jackson, I recommend visiting the webpage “Life Portrait of Rev. Dr. Anderson Samuel Jackson, Jr.” Although it is now defunct, saved versions are accessible through archive.org. Thanks go to the Jackson family member who originally compiled and composed this online tribute.

Another webpage, Mount Canaan Baptist Church’s “About the Ministry,” also contains information about Rev. Jackson. Since musical recordings exist from his time at Mount Canaan, perhaps it’s no surprise the church’s history emphasizes “an organ was purchased and a full-time music staff occupied the music department” during Jackson’s pastorate.


In 1958, Rev. Jackson organized Lakeside Baptist Church. Located at 722 Grand Avenue (aka 722 Elvis Presley Avenue), the church happens to face one of the city’s most celebrated entertainment venues – the Shreveport Municipal Memorial Auditorium.

In closing, here’s a handbill for Rev. Jackson that I found at a local junk shop about six years ago.