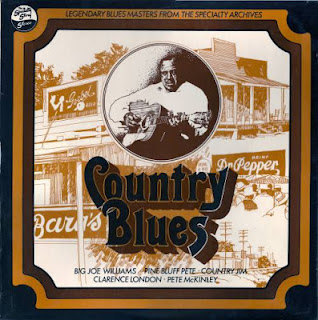 Though recorded in 1952, it took twenty-one years for Pete McKinley and Country Jim's "Shreveport Blues" to reach the record-buying public.  However, having only appeared on one compilation album released in England in 1973, I suspect few people have been able to enjoy this song that name-checks a local intersection (McNeil and 4th Street) and mentions a "cold chill" inducing woman.


Who were David "Pete" McKinley and James "Country Jim" Bledsoe? Good question. Both had records issued in the early 1950s, yet the blues cognoscenti have yet to clearly identify either. McKinley is known to have recorded about a dozen songs which have seen the light of day…including another "Shreveport Blues" (Gotham 505). Bledsoe recorded about thirty songs, yet half of these remain unreleased. This is unfortunate especially since the unissued titles seem interesting, for example "Travis Street Blues," "Undertaker," and "I'll Be Waitin' Up There." You can view Bledsoe's discography on Stefan Wirz's "American Music" website. I don't have much to offer the Bledsoe mystery, but imagine my surprise when stumbling upon this photograph of him in a Baton Rouge antique shop in 2010.

Details about these recording sessions are fairly limited, but 1970s Specialty Records employee Barret Hansen (aka disc jockey Dr. Demento) did share his collected information with music historian Sam Charter, who wrote the liner notes to the Country Blues LP. Again, thanks to Stefan Wirz's "American Music" website, you can read the notes online. In 1994, Specialty released additional songs from these recording sessions on the compact disc Bloodstains on the Wall: Country Blues from Specialty (SPCD-7061-2).

As for who is doing what on this recording of "Shreveport Blues," well, that's not entirely clear either. My ears hear a guitar, harmonica, and drums, while the singer sounds like McKinley based on his other records.