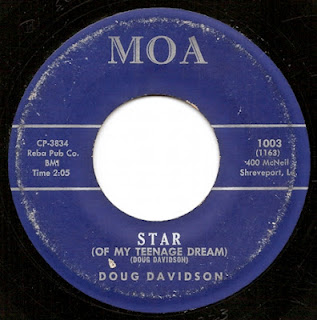 
On July 17, 2012, Margaret Lewis will be feted by the Mystic Knights of the Mau Mau (aka the Ponderosa Stomp Foundation) at the New Orleans Mint. Details of this show/interview can be found on the Ponderosa Stomp website, along with a few informative posts on their blog, plus a video overview of Lewis’ rich musical career. See these links below.

Lewis and her sister, Rose, sang backup vocals on a handful of 45’s recorded in Shreveport in the late 1950’s/early 1960’s. In some instances, the record labels contained credits identifying “the Lewis Sisters.” Today’s offering does not, though its flipside does…just to make things complicated and inconsistent. Credit or no credit, the Lewis sisters can be heard underneath the scratches on both sides of this record. Here’s the side I prefer – “Star (Of My Teenage Dream).”

As for Doug Davidson, I don’t have any information on him. I guess someone will have to ask Margaret Lewis during the interview portion of her upcoming performance.

The record label, Music of America (MOA), was operated by Wilson Evans. Interesting note: the label’s address, 400 McNeil Street, is the location of Shreveport’s YMCA. I’m not sure if Evans was living there, working there, or simply having his mail delivered there.